The specific sequence of bases that constitute a DNA molecule influence significantly its properties, in particular its structure and its flexibility. These effects are expected to play an important role in how proteins and drugs interact with DNA, as well as in the design and optimisation of DNA-based nanomaterials. Indeed, a number of proteins have been confirmed to rely on the structure and fluctations of DNA to recognise their target binding sequence. Specific protein binding to DNA is vital for a number of fundamental cellular processes, such as DNA replication and repair, chromatin compaction and transcription regulation.

Molecular Dynamics (MD) simulations have been used to integrate experimental data in order to make systematic studies of how sequence affects DNA. In particular, the Ascona B-DNA Consortium (or ABC) has pioneered this field (Beveridge et al., 2004; Dixit et al., 2005) and managed to recently obtain microsecond-scale MD trajectories of a purposely designed set of oligomers, which provides complete information on DNA sequence effects up to tetranucleotides (Lavery et al., 2010; Pasi et al., 2014). This data allowed to establish that tetranucleotides are the minimal-length unit of sequence required to correctly describe sequence effects on B-DNA.

This large set of MD data, encompassing more than 9 TB of stored trajectories, and just under 36 million DNA structures, has been analysed to provide to the users of the MuG VRE a complete description of the structure and flexibility of DNA, as a function of its local tetranucleotide sequence. The results of these analyses are presented below, in the MuG interactive flexibility browser. In particular, the conformational variations of DNA are described as a function of the well-known and widely used Curves+ helical parameters of DNA (Lavery et al., 2009). These represent a set of independent coordinates, as a function of which averages and covariances were calculated along the microsecond MD trajectories. Results pertaining to the inter-base pair helical parameters of the central dinucleotide of each of the 136 distinct tetranucleotides are shown below.

Average values are represented using a colour scale, in a concise representation (left) where the 136 distinct tetranucleotide sequences (of the form WXYZ) are grouped in columns according to their central dinucleotide (XY), and in rows according to its flanking sequence (W..Z)1. The set of average values to display can be selected by clicking the mage on the right. Flexibility information for each tetranucleotide appears in the lower part of the page when a coloured cell is clicked (Hospital et al., 2013). The displayed stiffness matrix is obtained by inverting diagonal 6×6 blocks of the covariance matrix. 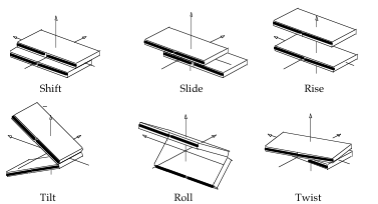 1. Missing cells in the matrix refer to tetranucleotides whose opposite strand read is present elsewhere in the matrix; e.g. CATA is missing, but TATG is present; see also Pasi et al., 2014. [Back]
2. Colormaps “RdBu 9”, “BrBG 10”, “Spectral 11” courtesy of Color Brewer 2. [Back]