The compute platform is designed in such a way that dedicated resources to the MuGVRE are dynamically assigned based on user demands. All infrastructure components begin to play together on the moment the MuGVRE user starts a tool job from the web portal.

The petition is processed by one of the two managers supported, PMES or SGE-oneflow. They both end up triggering the tool executable in the particular virtual machine where the selected tool is encapsulated. Below are explained the differences between both enactors, but anyhow, both include mechanisms to provide elasticity to the system, so that the number of active tool VMs is proportional to the number of job petitions, as long as cloud computational resources allow it.

Eventually, the petition reaches the virtual machine. If the tool corresponds to a workflow orchestrated by PyCOMPSs, the process manager will invoke the application using PyCOMPSs libraries. If not, the tool will be called directly. In any case. tools are generally wrapped by the mg-tool API, that acts as intermediary agent between the MuGVRE and the tool code itself to uniformelly communicate with it. Thought the API, the application or pipelines is eventually executed. 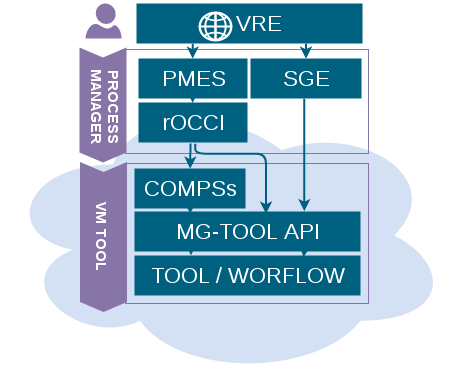 SGE (Sun Grid Engine) is used normally in cluster-based infrastructures as a general process scheduler. The MuGVRE backend uses SGE to manage applications where no complex workflows are necessary. Each tool job is send to a separated SGE queue populated with multiple instances of the VM where the tool implementation is encapsulated. The availability of these instances is controlled by oneFlow, an OpenNebula service that dynamically deploys VMs according to a set of configurable system metrics like the waiting time of the jobs, or the VM load. In this way, SGE queue workers can automatically grow or shrink on demand, with the only restriction of having at least one VM already deployed and ready to accepts jobs in each SGE queue.

The PMES (Programming Model Enactment Service remotely controls the execution of jobs in an underlying cloud platform through an Open Cloud Computing Interface (OCCI), regardless the cloud middleware in use (i.e, OpenNebula, OpenStack). PMES controls VM creation and contextualization, application execution, and VM destruction. Applications can either be single jobs, of COMPSs workflows internally using one or more VMs.

The COMPSs programming model is able to discover implicit parallelism in the pipelines, and hence, execute otherwise serial operations with an optimal use of a parallel environment. COMPSs workflows can be defined using Java, C++, or Python. COMPSs has been adapted to control the virtualization layer, making it transparent to the user, and also allowing to execute the same workflow in a series of environment, from single workstations, to HPC or grid/cloud facilities.